On this page you will find the ECHR application form and also the most comprehensive practical guide for correctly filling in an application before the European Court of Human Rights (ECHR).

You should be aware, however, that making an application to the ECHR independently (without a lawyer), or with non-specialized assistance, can be very risky.

In fact, in recent years 98% of the applications lodged with the Strasbourg Court have been declared inadmissible. Therefore, the Court has not even examined the complaints raised because the application was not complete or duly drafted. Almost all applications, in fact, do not pass the administrative admissibility filter because they are incomplete and not accurately filled in.

I am Gianluca Piemonte, an Italian lawyer specialized in applications to the European Court of Human Rights. I have lodged many applications before the ECHR against Italy and other States. In fact, Italy is one of the countries with the greatest number of applications and, as a result, we Italian lawyers are some of the most specialized.

There are many misconceptions about the obligation to be assisted by a lawyer.

Cases can initially be brought before the ECHR without the assistance of a lawyer. However, after the transmission to the Italian State, the assistance of a lawyer becomes mandatory. For this reason, it is advisable to be assisted by a lawyer right from the beginning in drafting the application. If you look for a lawyer later on, you will not save money, because the fees for examining the case will be the same and, in addition, you will have risked not getting past the initial filter for having tried to apply to the ECHR by yourself…

You can tell me about your case via my CONTACT US page.

Moreover, the application to the ECHR must be filled in in strict compliance to the provisions of Rule 47 of the Rules of Court.

A – Data of the applicant to the ECHR 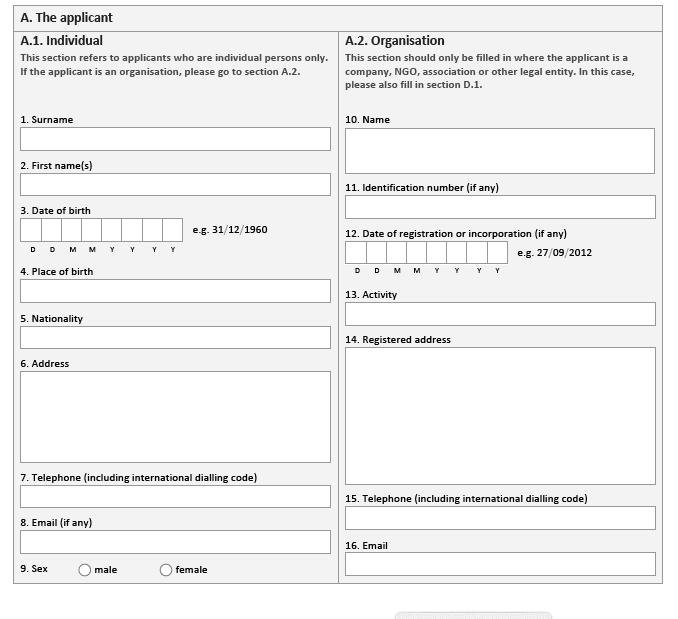 The data of the applicant to the European Court of Human Rights who is a physical person (private individual) must be entered in section A1. It is necessary to enter the personal data (name, surname, date of birth, etc.) and the contact details (address, telephone, e-mail, etc.) of the applicant.

Instead, if the applicant is a legal entity (company, association, organization, etc.), the data must be entered in section A2. Also in this case, it is necessary to enter the details of the legal entity (registered office, VAT number, date of incorporation, etc.).

Grouped applications to the ECHR with multiple applicants

If the application is lodged on behalf of two or more applicants (so-called grouped application), you have to distinguish whether it is based:

Where there are more than 5 applicants, the representative should send to Strasbourg:

Failure to comply with the requirements and formalities set out by the Court could result in the inadmissibility of the application and the destruction of all documents sent. Therefore, the Court will not examine the merits of the case.

B – State against which the application is directed 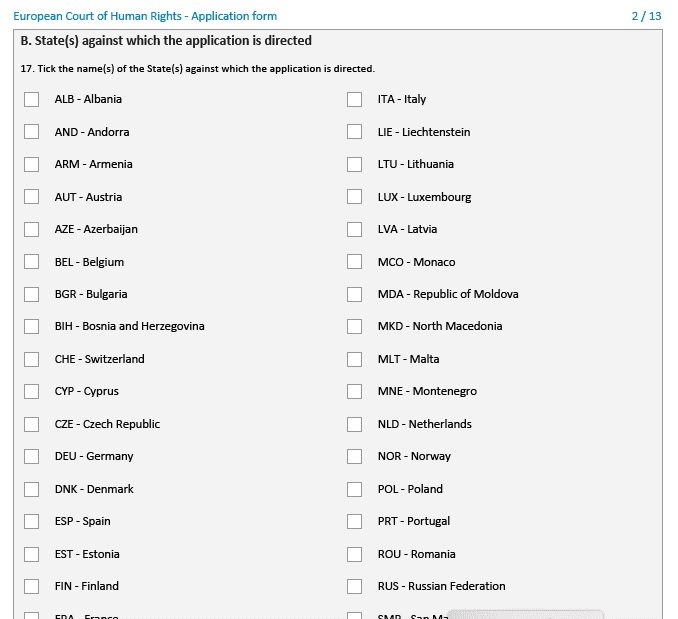 Section B deals with the State allegedly responsible for the violation of rights set out in the Convention or in one of its Protocols.

It is possible to tick more than one State.

C – Representative of an individual applicant 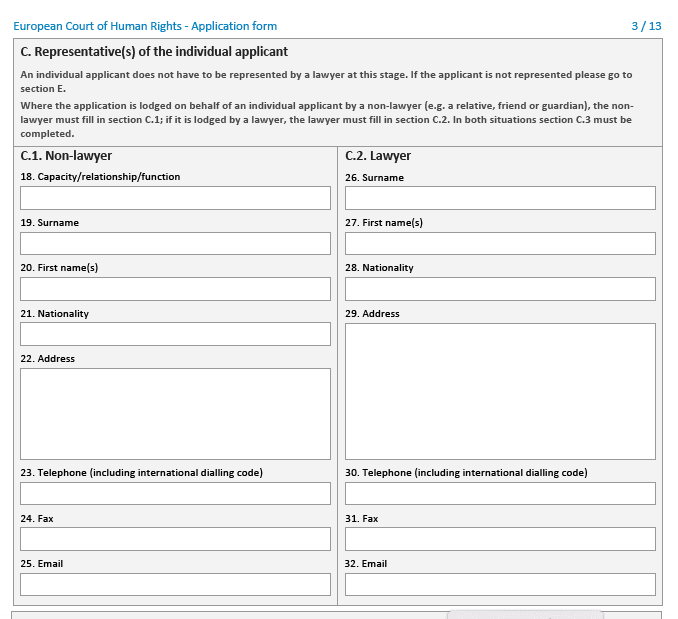 An application to the ECHR can be lodged by:

At the start of the procedure, you are not obliged to be assisted by a lawyer. But if the application is declared admissible and the Court examines the merits of the case, then a lawyer must be appointed. Therefore, it is advisable to use the services of a lawyer right from the beginning in order to be represented by a legal expert.

Both the applicant and the representative must indicate the date of their signature.

Do not attach a separate authority form, as is the case in Italian proceedings. Otherwise, you risk not being considered as the representative of the applicant and the Registry of the ECHR may correspond only with the applicant. In fact, the lawyer’s signature does not have the function of certifying the signature of the client-applicant, but only of accepting the commission.

A separate authority form is accepted by the Court only if the applicant:

Electronic communication between the representative and the Court

If the application is declared admissible, the applicant’s lawyer may use the eComm platform for electronic communications.

D – Representative of an organization

If the applicant is an organization (such as a company), it must be represented by:

If the organization is represented by a lawyer, also box D2 must be filled in. Again, it is necessary that the representative and the lawyer sign in original the authority section.

Subject matter of the application

Sections E, F, and G are the core sections of the application to the European Court of Human Rights.

E – Statement of the facts

Section E requires a concise, clear and chronological statement of facts. For each complaint or matter, there should be a separate statement of facts in chronological order. The applicant should indicate the documents supporting the complaints raised (e.g., judgments, medical reports, expert testimonies, witness statements, documents of title to property, reports of periods spent in custody, etc.).

F – Statement of alleged violations of the Convention and Protocols

Section F, as shown in the ECHR application facsimile, provides 2 columns to indicate:

Article 6, § 1 of the Convention – The duration of the ordinary civil proceedings concerning the claim for compensation for medical malpractice was excessive, since the proceedings lasted longer than a reasonable period. In fact, the writ of summons of the first instance proceedings before the Court of __ was served on ____ and the Court of Cassation delivered its final judgement on ____

G – Compliance with the admissibility criteria of the application

Section G requires the applicant to prove, for each complaint raised:

It is necessary to attach copy of all:

If necessary, you must prove that the final decision was served on the applicant or communicated to the same at a later date than the date of filing indicated in the decision.

Where no appropriate remedies are available, it is necessary to submit evidence of the date of the act or decision.

Section H should be completed only if the applicant has raised the same complaint in other international applications. For example, before the UN Human Rights Committee.

Section I is seen as crucial for the Registry of the ECHR, because one must:

Please remember to attach only copies, not originals, because no document will ever be returned by the Registry.

Signing of the application and confirmation of correspondent

The final part of the application must be signed in original by all the applicants or by their authorized  representative.

In addition, it is necessary to designate only one correspondent to receive communications from the Registry of the ECHR. In case of ECHR applications lodged by an international lawyer, the latter is always indicated in the corresponding box.

Conclusions on the ECHR application form

On this page you have discovered how to download an ECHR application form and how to complete it.

Therefore, we focused on the “container” and not on the “content,” which is the most important part.

In fact, the part regarding the subject matter of the application (sections E, F and G) must indicate the alleged infringements but it is necessary to provide persuasive arguments to convince the Court to ascertain the real violation. In order to draft a successful application, it is always necessary to refer to other judgments of the ECHR case law, often in French or English.

As I already outlined, you can draft an application without a lawyer, but at a later stage it becomes mandatory to have an international lawyer. If you expect to save money by appointing a lawyer later on, you are wrong. The fees will be the same, because the lawyer will still have to examine the case and to handle it as a matter of urgency, because of the short time-limits fixed.

As I mentioned, 98% of ECHR applications are declared inadmissible at the administrative stage. This means that the Court dismisses the case without even examining the merits because the application is not complete.

I am an Italian lawyer specialized in ECHR applications and I can help you to lodge an application with the European Court of Human Rights against any State which is a member of the Council of Europe. This way, I can raise before the Strasbourg Court the complaints you believe you have been a victim of.

Please write to me as soon as possible at info@studiopiemonte.com or go to the CONTACT US page to tell me about your case.

I have already helped many other people and I would be glad to help you too.

FOR MORE INFORMATION on

you can read my other article Appeal to the European Court of Human Rights: 21 Useful Information

Are you a lawyer too? We can collaborate, as I have already done with many other colleagues who are Court of Cassation lawyers, criminal lawyers or administrative lawyers. The mistake made by many colleagues, in fact, is to apply to the ECHR as if the Court were a fourth instance court, namely in the most erroneous way.