Every year, the number of minors willing to change their gender increases by 12%, according to the data collected by our law firm that specializes in the gender rectification process.

In this article you’ll find out that a minor can indeed change his/her gender and name, but that at the same time, it’s not always either easy or possible. Factors that can make the difference are:

I am an attorney specialized in the gender rectification process and provide legal assistance during the transition process for both adults and minors.

In this article, I’m going to talk to you specifically about gender rectification and name change for minors in Italy.

Reasons for gender reassignment amongst minors 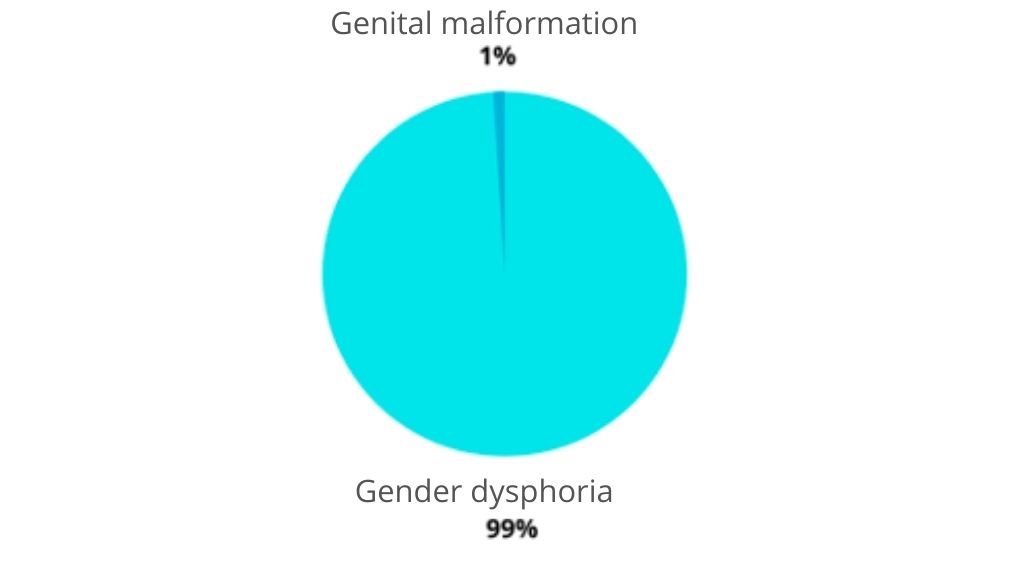 This data has been collected collected by Piemonte Law Firm during 2018, 2019, 2020 and 2021
In general, there are primarily 2 reasons why a minor may request a gender rectification:

At what age can you obtain a gender change?

The change of gender due to gender dysphoria can be taken into consideration starting from the age of about 14 years (although nothing excludes that it can happen earlier, although in Italy there are no cases). No law sets a specific age.

Whereas the gender change for a malformation or genital defect could occur even after a few months or years after birth. There are theories of gender change to be possible even at the age of 5, decided by the court of Catania (Italy).

99.3% of the cases of sex change of minors occur due to gender dysphoria, i.e., when one identifies himself/herself in the opposite sex compared to the biological one.

Gender identity (male or female) starts developing between the age of 2 and 4. And usually by the age of 5, the child has a certain degree of awareness to be able to not identify himself/herself with his/her own body.

Often, the minor and the parents start the psychotherapeutic or psychological process immediately, but wait until they reach 15-16 years of age before starting hormone therapy along with the legal process accompanied by an attorney.

Swiss studies have shown that after puberty the ability to perceive one’s own body can change (Ruth Baumann-Hölzle, specialized in social ethics).

Waiting until puberty is therefore a reasonable decision, considering that the capacity for self-determination strongly develops starting at the age of 16. 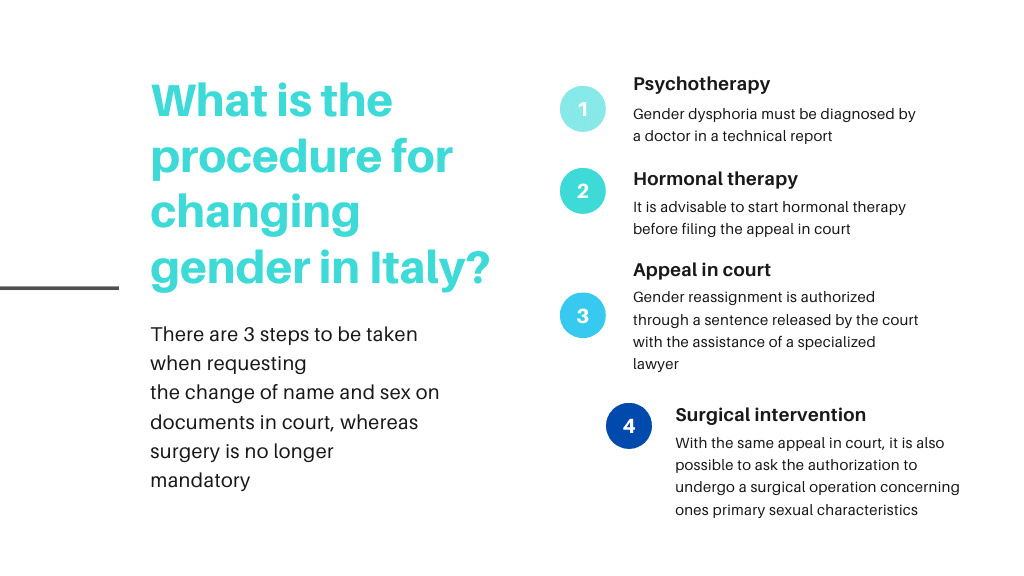 The transition path of the child who has parental support is certainly easier and faster.
During the last years, thankfully, minors with gender dysphoria are increasingly obtaining parental support.

The parent must initiate either a psychological or psycho-diagnostic process for the child/teen, all while requesting the assistance of private professionals or the national health system (psychologists or psychotherapists).

The purpose of the psychological path is to be able to :

At the end of the psychological process (step 1), a “gender dysphoria diagnosis” must be made.
With the diagnosis of gender dysphoria, it is suggested to involve an endocrinologist in order to begin hormone therapy (step 2).

At the end of step 1 it is also highly advisable to contact a lawyer specialized in gender rectification, for the entire process in court (step 3).

The lawyer will then file an appeal to request the change of gender (MtF or FtM) and the change of name (from male to female or vice-versa).
In this case, the parents will be the ones to choose the attorney depending on: 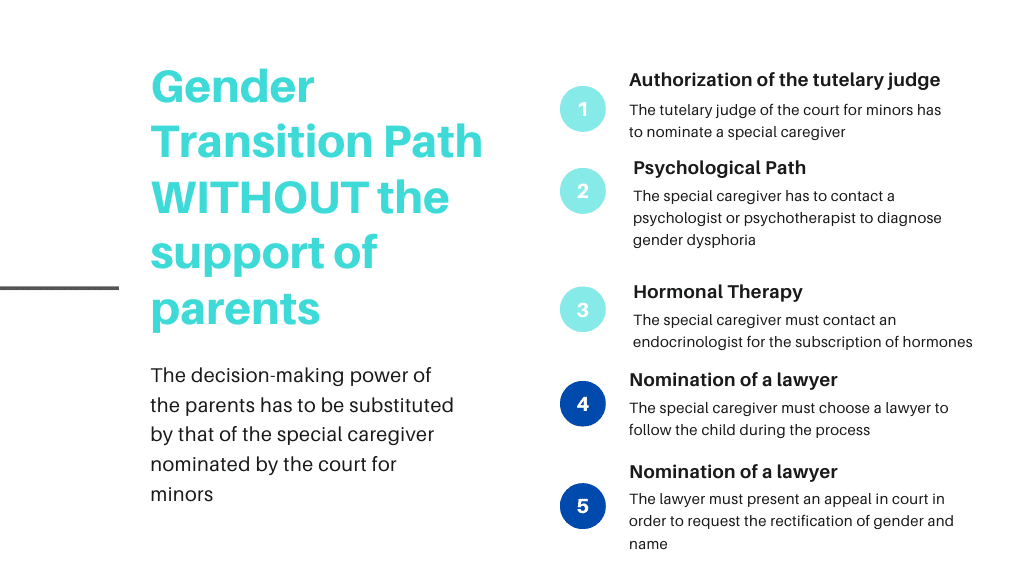 Unfortunately, there are many cases in which parents do not recognize or do not want to recognize the gender dysphoria of their son or daughter. This unfortunately increases the discomfort of the child, already disoriented by the social environment.

This is a very delicate subject, where, first of all, the listening of the minor and the protection of his or her psycho-physical well-being should prevail over everything. Therefore, a parent who prevents this choice could cause damage to his or her son or daughter.

It is not easy for children to recognize gender dysphoria on their own, even if they are able to understand the divergence between their internal feelings and biological sex. And it is precisely for this reason, that it also becomes difficult to be able to seek external help if they already have family members who are distracted, disinterested, or, even worse, hostile to recognizing the child’s gender dysphoria.

In these cases, the suggestion is to always try to involve the most available family member and push him/her to seek psychological support. For those who have economic difficulties, the psychological path can also be supported by the national health system, free of charge.

What should the child lacking of parental support do?

In the most difficult cases, children without parental help may:

Instead, for minors who are already able to look after their own interests independently, it is also possible to apply to the Juvenile Court of their own town for an appointment with a special guardian. In order to apply to the Juvenile Court, it is not necessary to have a lawyer. Within this court, it is possible to request to speak with a judge who will give the necessary and useful directions.

Authorization of the tutelary judge: how to do it?

The child who lacks parental support therefore has 2 alternatives:

To request authorization from the tutelary judge, these are the following steps:

The special caregiver (rather than the parent) will then seek and appoint a psychologist (step 1), an endocrinologist (step 2), and a lawyer (step 3).

The advice for those who have already reached the age of 16-17 years, is to wait until they reach the age of majority (18+).

It’s no secret that the procedure for requesting the authorization of the tutelary judge indeed requires a lot of time.

Gender change of the minor due to “Genital malformation” (rare cases) 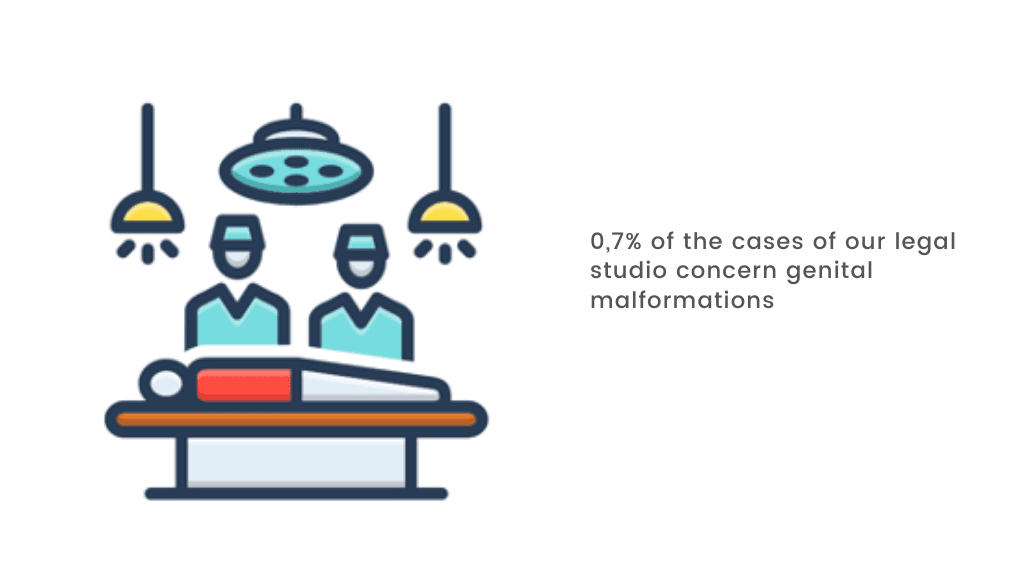 More rare are the cases of sex change of minors due to genital malformations or defects (0.7%).
In fact, every year, 1 out of 5,000 babies born has ambiguous genitalia at birth due to:

According to the law, the birth of a child must be declared within 10 days of the birth. In cases of genital malformation, it is possible that the sex declared does not correspond to the chromosomal sex nor to the one to be considered prevalent.

The uncertainty concerns the phenotypic sex, that is, the conformation of the external genitalia. In these cases, some tests (such as amniocentesis) could clarify the chromosomal sex, but the ambiguity of the genitals could have confused the doctors and also the parents.

Can a minor obtain a gender-change surgery? 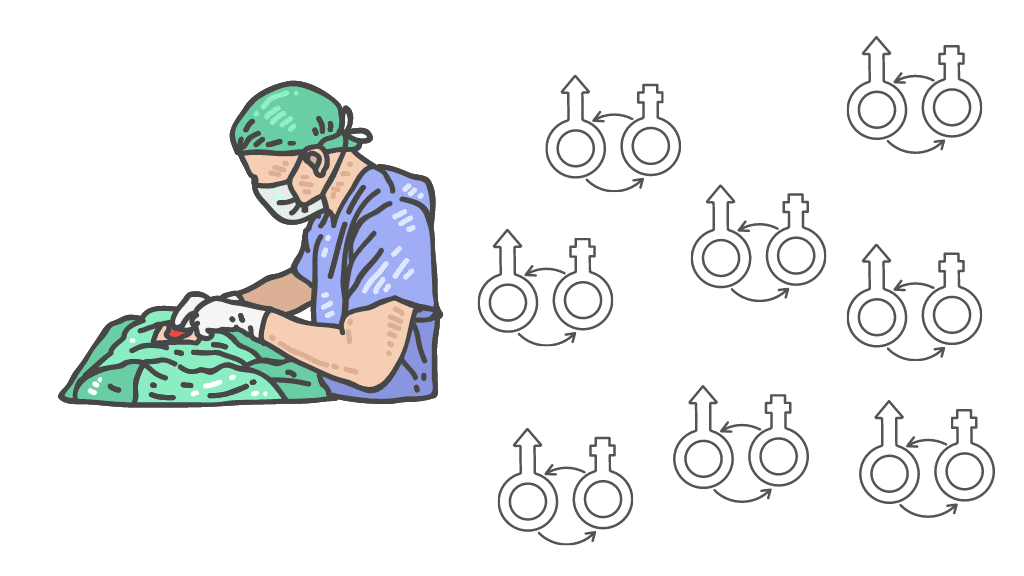 If the case involves genital malformation, the surgical operation could be performed upon the decision of the Hospital. In this case, it would not be considered as a surgery to change the gender from boy to girl or from girl to boy, but rather as a “corrective” operation of the malformation. This operation, can be performed at any age from 0 to 18 years.

But the case is different when it comes to gender dysphoria involving a minor.

First of all, the surgical operation must be authorized by the judge with a sentence (usually, with the same sentence that authorizes the gender rectification and name change). The sentence can be issued even before the age of 18 and, generally, in Italy, we have cases of authorization for surgery involving teens only after age of 16. Rarely, the possibility of surgery before the age of 16 can be done. 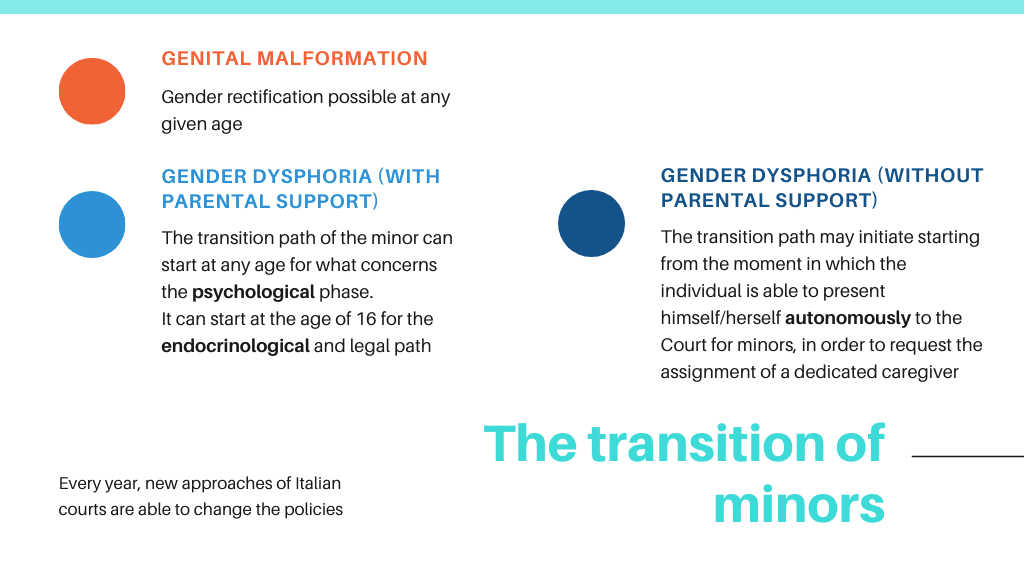 Let’s summarize the transition path of a minor.

First of all, you have to distinguish the cases for which the gender change is requested:

I am an attorney who specializes in the gender rectification process, and over the past few years I have helped an infinite number of transgender minors change their gender and name on their documents.

FIND OUT MORE: If you want more information on the entire transition process, you can read my article How to change sex in Italy? Guide in 3+1steps

There are 3 ways you can CONTACT ME NOW for free and get more information:

Scroll to Top
Open chat
1
Chat WhatsApp
Hello, How can I help you?