Hi, we are an Italian law firm specializing in court procedures to request authorization for a gender change surgery. How can we help you?

If you are looking for precise information on the operation for sex reassignment surgery (SRS) in Italy, you are in the right place.On this page you will be able to find all the essential information you need!

Gender reassignment surgery is one of the major concerns for those undergoing gender transition:

Over 70% of transsexual people who have obtained gender reassignment surgery from MtF or FtM in Italy with my assistance do not undergo the operation for sex-change.

As a matter of fact, 98% of these transsexuals did not choose to undergo surgery during the first 3 years after the rectification of gender attribution obtained in Italian Court.

The transition process includes 3 necessary roads and an optional fourth one (not compulsory):

I am Gianluca Piemonte, one of the very few lawyers specialized in Italy for what concerns sex-change, and I take extra care when it comes to giving assistance to point n. 3, that is, for the request to the Court to obtain the authorization of name and sex change on all documents.

However, on this particular page, I would like to go into detail on point n. 4, that is, on sex reassignment surgery.

If you would like to read the complete process, you can visit our page complete guide on How to change sex in Italy.

Contenuti nascondi
1 Is sex-change without a surgical intervention possible?
2 What can be changed through surgery?
3 When is the authorization of the Court necessary for undergoing surgery?
4 At what age can a sex change be requested?
5 What if I have already went through the operation?
6 Where is the sex reassignment operation performed?
7 The ONIG or WPATH protocols
8 Sex-change surgical operation abroad
9 Sex-change operation cost
10 Surgical operation in a foreign country. How to get a refund?
11 Sex Reassignment Surgery: Conclusions 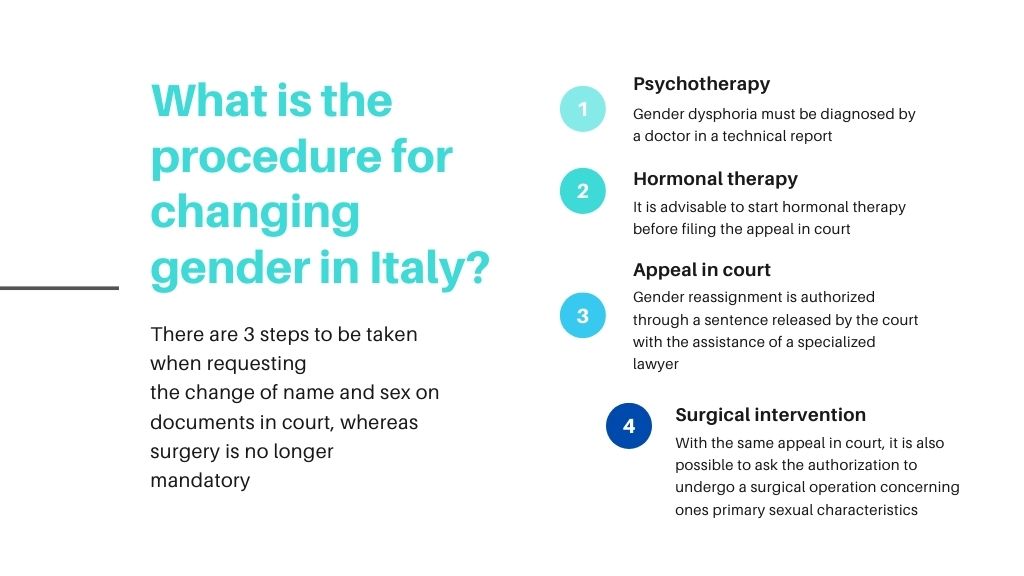 Is sex-change without a surgical intervention possible?

Let’s start off with the first question that many of my clients ask themselves.

Is surgery necessary for sex-change? Is genital reassignment surgery required by law?

No, it isn’t. As previously mentioned, today it is not mandatory but optional to undergo the surgery.

Since 2015, the Italian Supreme Courts have decided that the surgical operation is no longer mandatory for what concerns sex-rectification and the name change on all personal documents.

What can be changed through surgery?

The transsexuals diagnosed with gender dysphoria, identify themselves with the opposite sex compared to the biological one and feel the deep desire to change their sexual characteristics. This can be distinguished between:

When is the authorization of the Court necessary for undergoing surgery?

The surgical operation for changing the primary sexual character must be aauthorized by the Court with a sentence. As a matter of fact, art. 5 of the Italian Civil Code states the prohibition of acts of disposition of one’s own body, such as a transplant, a pregnancy interruption and, as far as we are concerned, sex-change.

During the last few years, authorization for surgery has been requested from the Court in conjunction with the request for the change of name and sex on the Italian documents.

Therefore, surgery is the last step involved in the process of sex-change, as explained on the page complete guide on how to change sex in Italy.

At what age can a sex change be requested?

The question of age definitely creates a lot of confusion among people and parents who contact me willing to start the procedure. Here is a simple explanation of what is expected in Italy:

FIND OUT MORE: If you want more information, you can read my article Gender Change for minors.When is this possible?

What if I have already went through the operation?

Some people contact me after they have already performed the primary sexual characteristics surgery. This was possible if:

Obviously, also in this case it is possible to contact me to present the appeal to the Italian Court and request the change of name and sex on all Italian documents (Italian identity card, Italian passport, etc.). The advice is to start the procedure as soon as possible because these situations are the ones that can create greater problems in social, work, bureaucratic, etc. and relationship realms.

How do you ask the grant for the surgical operation?

Authorization to undergo surgery for the demolition or reconstruction of primary sexual organs must be requested with an appeal to the Court. The appeal can only be presented to the Court by a Italian lawyer, because the person cannot defend himself/herself.

Generally, the lawyer asks for 3 authorizations through the same appeal:

Where is the sex reassignment operation performed?

The operation can be carried out in Italy or abroad. In Italy, you can be followed by the public service of the Italian National Health System (S.S.N.) or the private service. The differences between public and private services concern many aspects, but the main ones are:

The main centers where you may carry out operations with the National Health Service are at:

The ONIG or WPATH protocols

Those choosing the public service, with the National Health System, are obliged to follow protocols, which in Italy can be:

Protocols are clinical guides, that professions must use during the transition process. This provides for the necessary steps and mandatory times involved. There is a lot of debate and criticism in the transgender community in regard to these two protocols.

As a matter of fact, once the ruling authorizing the surgery has been obtained, the public hospital is also obliged to perform the operation. This is possible even if the transition process did not follow the ONIG or WPATH protocols (for example, for having carried out a transition path with a private psychologist and endocrinologist).

In this article we have talked about the sex-change operation in Italy, in which it is mandatory to respect the Italian law. As we have observed, for the man-to-woman (MtF) operation and the woman-to-man (FtM) operation it is necessary to have the authorization of an Italian court with a sentence.

The operation to change sex abroad, on the other hand, is not subject to Italian law, but to the law of the State in which the operation is carried out. The main foreign countries chosen for sex-change operations are:

The cost of sex-change surgical operation with the private service is very high (from 10,000 euros for some interventions involving secondary sexual characteristics).
Needless shall I deny deny that this is the main reason why many decide to undergo operation abroad, where prices are even lower than 70%, but not everywhere.

In the United States, for example, the cost can be:

In Italy, on the other hand, the cost of a metoidioplasty operation can be around 13,000 euros in a private clinic.

Instead, the surgical operation with the public service is free while other services are performed with fixed and controlled prices (i.e. fixed / blocked).

The choice to go abroad is also due to the long waiting times in Italy, due to the bureaucracy of the waiting lists. In recent years, however, the number of transsexuals requesting sex-change without surgery has increased.

The choice of the operation is often left to a future date or is not really taken into consideration.

Surgical operation in a foreign country. How to get a refund?

Reimbursement of surgical expenses performed in European Union countries can be:

While, the reimbursement of surgical expenses performed outside the European Union will be a maximum of 80% (with advance of the costs by the patient).

To get a refund, it is necessary to apply to the ASL and ask for more detailed information. In fact, each Italian region has different protocols.

In general, in order to obtain reimbursement, it is necessary to justify the reasons why that same operation must necessarily be performed abroad and not in Italy to the ASL.

As you have been able to read on this page, the surgical operation (MtF or FtM) is no longer mandatory for sex-change, but only optional.

If you choose to undergo surgical operation in Italy, the authorization of the Italian Court with a sentence is mandatory.

In Italy, you can therefore choose to operate with:

If you have already carried out the surgical operation (in Italy or abroad), all you need to do is consider the aspect of involving the Court for the rectification of personal documents.

The transition path necessarily involves a legal process in court, in order to ask for authorization to:

Whether you choose to operate or not, the assistance of a lawyer for the legal process in court will be necessary.

Many people ask assistance from Italian centers for gender dysphoria and then are redirected to several law firms indicated by them.

I am an Italian lawyer specialized in the legal process for sex change and am not directly connected to gender dysphoria centers. Not to mention, I believe there is no reason why a clinical center should be tied to a lawyer.

I am available to personally follow your legal path in court by putting all my experience and knowledge of human rights and personality at your service. The legal process now involves electronic filing options and therefore I am able to assist you all throughout Italy, no matter in which Provenance.

Find out more on my page How to change sex? Complete guide.

There are 3 ways you can GET IN TO CONTACT WITH ME RIGHT AWAY for free and be able to get more information: